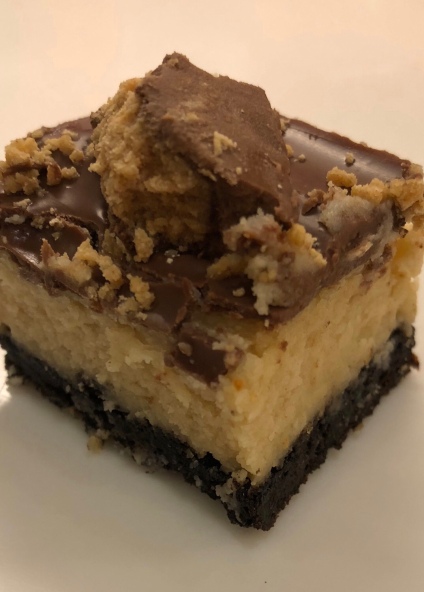 This post is a little later than I hoped, but it is only because Bill Leff & Wendy Snyder were so nice and invited me out to their WGN radio show this morning to talk about Christmas treats.  It was a remote location broadcast from Treetime Christmas Creations out in Lake Barrington, and it was so festive and fun! I brought with me a few of my favorite, as well as Bears favorite, treats for the holidays to share with the audience, and I will be sure to post the recipes in the near weeks leading up to Christmas. Thank you, Bill & Wendy, for having me on your show again!

Ok, back to baking for the Bears.  Since last week’s caramel cheesecake bars were such a hit, I decided while I was down in Miami and talking with some of the Bears people, that I would continue on the cheesecake theme this month.  Kevin, one of the camera men, suggested that I run with “Peanut Butter”, so I said, “done!”.  However, because I know that not everyone loves peanut butter (actually, maybe it’s me that doesn’t love peanut butter), I decided to do a second cheesecake bar in addition, and pulled another great recipe from the same blogger.  OREO Cheesecake Bars! I didn’t get solid feedback or commentary on either of the cheesecakes, but my brother said, “everything got eaten”. He was busy and wasn’t there in the morning when the treats were put out. So, I’ll  take that as a good sign that these are two good recipes.

Here are the few tips I have for you:

Ok, here are the recipes, both from one of my favorite bloggers, The Brown Eyed Baker:

Thank you for reading my blog. And GO BEARS!!!

2018 will mark my 7th Season making treats and baking for the Chicago Bears. You might be thinking, how does one land that gig? Well, let me tell you. It’s riveting… My younger brother, Danny, works full-time for the Bears. Our entire family have been life-long Bears fans, btw. Back in the summer of 2012, he came to me and said, “Hey, we need someone to make treats for the team. Do you think you can do it? Because my boss said, Dan, you’ve got all those sisters, can’t one of them bake? So, I volunteered you.” My first response was, “YES, but I don’t know how to bake”. I mean, up until that point, the only things I remember ever baking were 1) S’mores Bars back in the 80’s off a recipe on the back of the Golden Grahams cereal box. Come to think of it now, I don’t even think those things went into the oven – so technically that wasn’t baking. And 2) Good old Nestle Toll House cookies – which NEVER turned out the same each time I baked them and it drove me nuts and got me to HATE baking for that very reason. I was always in love with cooking, though. I was the gal who threw dinner parties often and provided an obnoxious array of hors d’oeuvres and wine – that’s more my thing. Side note: I learned the hard way that baking and wine don’t mix. Ha! However, I was honored and excited to have been asked to step up to the plate for this little baking / treat-making gig, for THE CHICAGO BEARS, no less. So my answer was an enthusiastic, YES! I figured I still had a month before the first regular season game, which is when the “treat days” begin – every Thursday during the regular season (not preseason). So, I hit the streets in search of good recipes and then got to work test-baking in the kitchen for the rest of that summer. As I became more internet savvy, I started following lots of baking bloggers and watching video tutorials. I would go to parties and if I tasted something that I thought was exceptional, I would never hesitate to ask for the recipe. Baking for the Bears is always in the back of my mind when eating desserts. I now have an arsenal of treat recipes worthy of offering at a bake shop, if I do say so myself;) . I started getting requests for my pound cake, outside of Baking for the Bears, and my Double Chocolate Chip Sea Salt cookies have been quoted as “The best cookies in the world” by a well-known player, as well as friends, family and neighbors. One of the first things I did was perfect a cookie of my own that comes out pretty consistently crunchy on the outside but chewy on the inside. I no longer rely on the old Toll-House recipe. It’s the one thing I never get tired of baking. The guys get them every week. With that said, this season, I plan to blog my recipes each week, and share with you whatever it is I am making for the Bears. I’ll also give you tried & true feedback on what worked, what didn’t, and any fun comments that the players, staff, friends & co-workers might have regarding the treat of the week. My office colleagues love it when football season rolls around, because I typically find new recipes and test-bake on Sundays to bring in on Mondays for critical reviews. From there, I decide if they are Bear-worthy for Thursday Treat Days at Halas Hall. I hope you will check in periodically and enjoy my blog. I’m super excited for the 2018 Bears football season both on the field and in the kitchen! GO BEARS! This is gonna be a good season… I can feel it! View all posts by Sarah