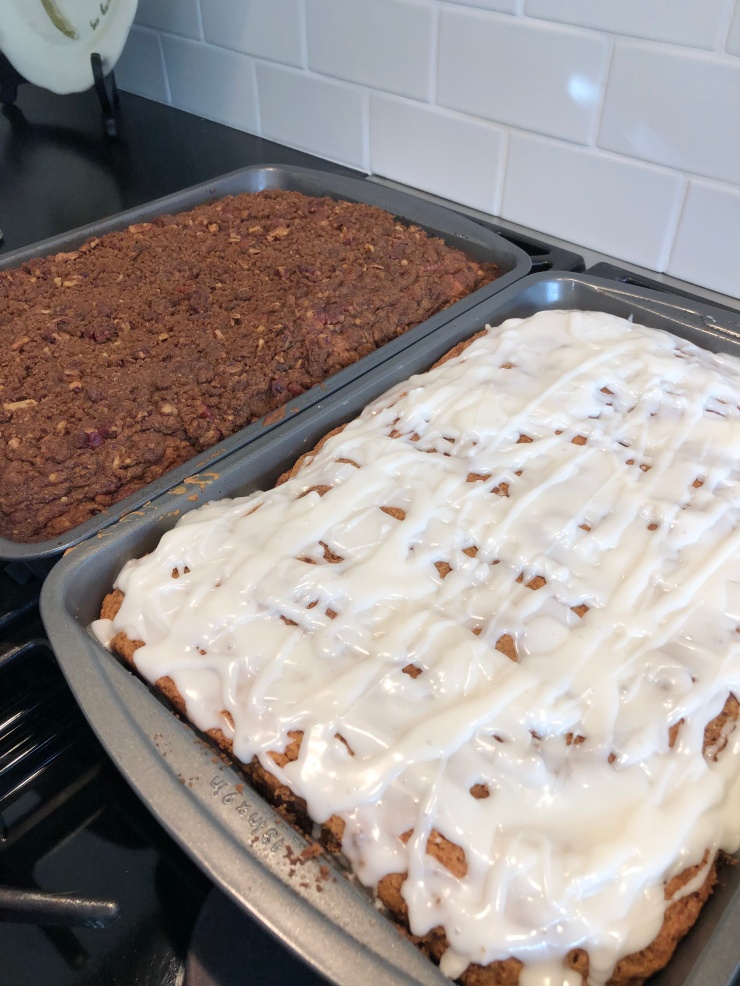 So this week I took my “Baking for the Bears” show on the road and headed up to Milwaukee on Tuesday night.  My sister Tracy lives in Fox Point, and had invited me up to go see Celeste Barber’s comedy show with her and a couple of friends.  I love Celeste Barber! If you don’t know who she is, check out her Instagram @celestebarber . She takes HILARIOUS selfies that imitate celebrity selfies.  If you want a laugh, you should follow her.  Her stand up live show was very funny as well.  So that was Tuesday night, and because I live in Chicago, I had packed an overnight bag – and a few baking essentials since I knew that baking day is Wednesday…and because I absolutely LOVE cooking and baking…and sitting and eating and drinking wine…in my sister’s kitchen.  Tracy is also an excellent cook and baker, and she always tells me “come up here and we’ll bake!”.  So this week I took her up on the offer.  We had a ton of fun.  It was truly a “good-for-the-soul” couple of days and nights up there with my big sister.

We woke up early Wednesday morning, and she tackled the balls while I got to work on two different kinds of coffee cake.  These cakes are really quite different from each other but equally delicious, which is why I couldn’t decide which one to make, so just made one of each to send to the Bears.  One has pecans, and the other is cinnamon – no nuts. Always good to have a no-nut option, I think.

The first one I made is a cake by Ree Drummond, which she calls “The Best Coffee Cake Ever”.  If you follow Ree, you know she calls quite a few of her recipes “Best Ever”, like  her “Best Lasagna. Ever.”, “Best Ever Chocolate Sheet Cake”, and honestly…she could be right, her recipes are fantastic, at least the ones I’ve tried so far.  This coffee cake is one that she says was her mother’s recipe.  I love old family recipes so as soon as I read that on her blog, I decided to try it. I did a test run on family and my cousin said it was “the best coffee cake” she had ever tried.  That’s all I need to hear to have the confidence to send it along to the Bears.  However, Tracy and I were busy baking and prepping and talking, when this one was in the oven, and every time we checked it with a toothpick it didn’t come out clean, so we would put it back in for a few minutes.  Because I was not entirely familiar with cooking times on Tracy’s oven, I trusted that it wasn’t done.  WELLLL, that was not the case.  Turns out the toothpick was just picking up the butter topping, not raw batter. In the end we over-baked this a bit, but Tracy is the queen of improvising and not wasting a thing…so when I cut into it and noticed it was dry as the Sahara and was going to toss it, she immediately said “No! Wait, the topping is SOOOO good, we cannot let these go to waste.  I will cut the cake down thinly and we will call them Pecan Crunch Bars!” I was hesitant but did as she said, and sure enough, when my brother Danny called me last night he said “everything got eaten, including that cake you were worried that you over baked”.

YAY! I was so excited to hear this! So, here is the recipe link to The Pioneer Woman’s cake.  The Best Ever Coffee Cake

The second cake I made is so simple – from a box cake mix. I love frosted cinnamon rolls, especially from Ann Sathers here in the city.  But I feel like you need to eat the rolls pretty soon after they are baked and they are never as good the second day.  So I found this recipe for an easy cake that resembles the fresh baked cinnamon roll taste.  Its from a blog called Cookies & Cups: Easy Cinnamon Roll Cake… and Danny texted me early in the morning on Treat Day and said “Delicious cinnamon cake, it’s already gone!” So it was the first thing to go.  A true sign that it’s a good recipe.

There are so many different coffee cake recipes out there, so I’ll continue my search and test bake them and share my findings with you in the months to come.  But for now, I hope you try either of these.  And below are the few tips I have for you on each:

I think that is it – but if you have any questions or comments please feel free to reach out to me!

Thank you so much for reading my blog and GO BEARS!!! 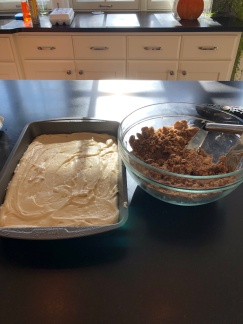 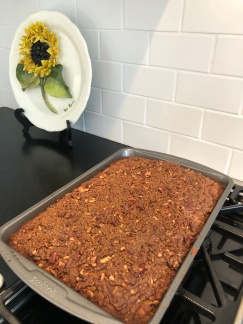 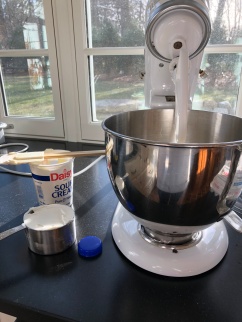 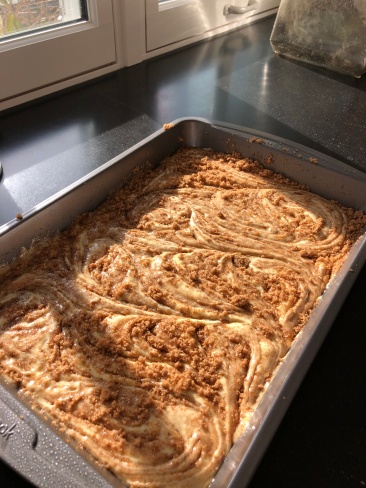 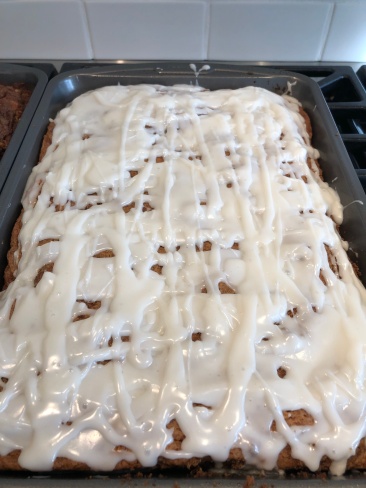 2018 will mark my 7th Season making treats and baking for the Chicago Bears. You might be thinking, how does one land that gig? Well, let me tell you. It’s riveting… My younger brother, Danny, works full-time for the Bears. Our entire family have been life-long Bears fans, btw. Back in the summer of 2012, he came to me and said, “Hey, we need someone to make treats for the team. Do you think you can do it? Because my boss said, Dan, you’ve got all those sisters, can’t one of them bake? So, I volunteered you.” My first response was, “YES, but I don’t know how to bake”. I mean, up until that point, the only things I remember ever baking were 1) S’mores Bars back in the 80’s off a recipe on the back of the Golden Grahams cereal box. Come to think of it now, I don’t even think those things went into the oven – so technically that wasn’t baking. And 2) Good old Nestle Toll House cookies – which NEVER turned out the same each time I baked them and it drove me nuts and got me to HATE baking for that very reason. I was always in love with cooking, though. I was the gal who threw dinner parties often and provided an obnoxious array of hors d’oeuvres and wine – that’s more my thing. Side note: I learned the hard way that baking and wine don’t mix. Ha! However, I was honored and excited to have been asked to step up to the plate for this little baking / treat-making gig, for THE CHICAGO BEARS, no less. So my answer was an enthusiastic, YES! I figured I still had a month before the first regular season game, which is when the “treat days” begin – every Thursday during the regular season (not preseason). So, I hit the streets in search of good recipes and then got to work test-baking in the kitchen for the rest of that summer. As I became more internet savvy, I started following lots of baking bloggers and watching video tutorials. I would go to parties and if I tasted something that I thought was exceptional, I would never hesitate to ask for the recipe. Baking for the Bears is always in the back of my mind when eating desserts. I now have an arsenal of treat recipes worthy of offering at a bake shop, if I do say so myself;) . I started getting requests for my pound cake, outside of Baking for the Bears, and my Double Chocolate Chip Sea Salt cookies have been quoted as “The best cookies in the world” by a well-known player, as well as friends, family and neighbors. One of the first things I did was perfect a cookie of my own that comes out pretty consistently crunchy on the outside but chewy on the inside. I no longer rely on the old Toll-House recipe. It’s the one thing I never get tired of baking. The guys get them every week. With that said, this season, I plan to blog my recipes each week, and share with you whatever it is I am making for the Bears. I’ll also give you tried & true feedback on what worked, what didn’t, and any fun comments that the players, staff, friends & co-workers might have regarding the treat of the week. My office colleagues love it when football season rolls around, because I typically find new recipes and test-bake on Sundays to bring in on Mondays for critical reviews. From there, I decide if they are Bear-worthy for Thursday Treat Days at Halas Hall. I hope you will check in periodically and enjoy my blog. I’m super excited for the 2018 Bears football season both on the field and in the kitchen! GO BEARS! This is gonna be a good season… I can feel it! View all posts by Sarah

Listen to My WGN Radio Interview 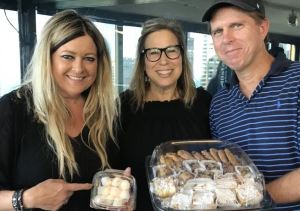